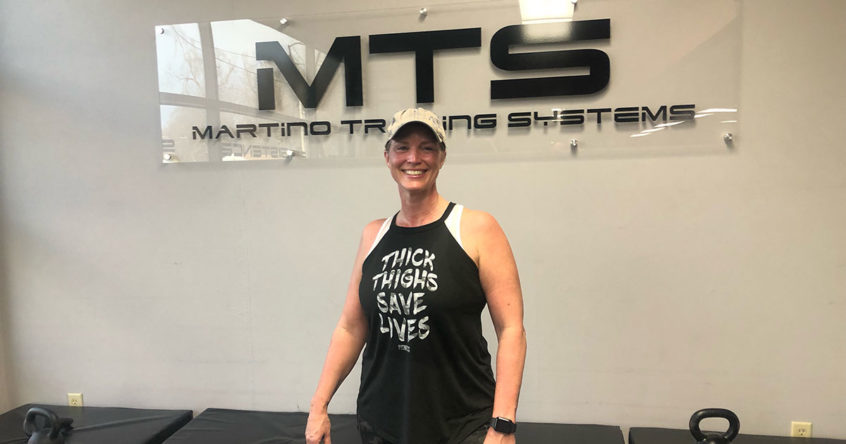 Congratulations to Linda Marshall on being named February’s Athlete of the Month! To say she has had a long road is an understatement. She started with us in September of 2020. She was pre habbing both lower extremities as she was scheduled for double knee replacement surgery in January and March of 2021. One year ago she had the surgery, and after being cleared by her Doctor she resumed training at MTS 5x per week! She has lost over 30lbs, seen significant loss in body fat, has lost 29 inches in measurements, she has given up the heaters, and changed her nutritional habits (eats healthy). Needless to say she has made some major lifestyle changes and has made her health a priority. She rarely misses a workout and has made herself a staple in our 7:00am crew. “Committed” has been her motto and committed she has been. Congratulations Linda, the best is yet to come!!

Occupation:
I lead Contracts for an IT solutions company based in Kansas City.

What did you do before joining MTS in regards to working out?
My knees were shot, I couldn’t walk around the block without limping. When orthopedic recommended total knee replacement for each knee and encouraged me to “prehab”, I reached out to Paul at MTS*. Pre “bad knees”, I’d worked out solo at a local gym and ran. In the past when I lived in KC, I’d also worked with a personal trainer.

How long have you been with MTS?
Prehab work started in September 2020 to build leg strength for the knee replacements of January & March 2021.

After finishing physical therapy on the 2nd knee, I returned to MTS in May 2021 and started with 3x a week. Paul and Andy were instrumental in modifying exercises to what my knees would allow.

By July 2021, I was strong enough to shift to 5x a week and haven’t looked back.

What’s your favorite workout/exercise at MTS?
Finishers with band stretching.

What’s you least favorite workout/exercise at MTS?
Anything on the board with the word AMRAP by it.

How is MTS different from other methods of training you may have tried in the past?
MTS’s model is the hybrid of solo vs. personal training, each of which I’d done in the past but didn’t love. The former meant I was trying to develop my own routines, coach myself….how can you do that if you aren’t qualified? The latter meant I was paying a lot of $ for a person to count my reps and make small talk….how can you do that when you’re trying to just breathe and finish your work out?

MTS’s model allows for personalized training within the small group setting so you can follow the given day’s program while receiving modifications on the routine and guidance on form to prevent injuries.

I described my daily routine at MTS to someone as “I do the work w/o having to think for 1 hour of the day.” Which is nice because the rest of the day is analytical thought and choices and mentally taxing…this is my time where I can turn off my brain and just let the body do its work.

How has MTS helped you attain your fitness goals or athletic endeavors?
My initial goal was to safely prehab/rehab; MTS’s structured environment with coaching was perfect. Moving forward, I’ll continue to build on strength, weight loss and overall fitness. At age 54, I’m in the best shape — after one year of dedicated training – since I was in my 20’s.

Advice to those just starting out?

* Shout Out to MTS for community give back. I used to work for Harmony House, a local domestic violence shelter. I learned about MTS because of their donation work to HH. When I decided to “do something” about my body, I thought of MTS as a result.